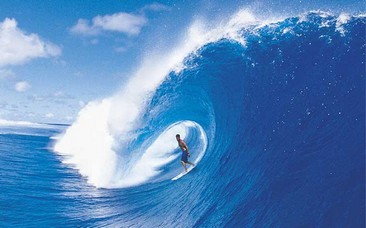 A little about Dave… Dave “Ratsa” Rastovich has every surfer’s dream job. He gets paid for free surfing the best waves in the world. In other words, despite the fact that Dave is not on the pro surfing circuit, he is sponsored by Billabong to just surf. How did Dave land such and dream job? He was burnt out surfing the pro circuit, decided he’d had enough and that he needed radical change. He then boldly told Billabong he wanted to free surf and they said they’d sponsor him to do just that! How cool is that. But no, free surfing is not the big idea.

Dave’s Dad lives in New Zealand on his farm. The farm is peaceful and quiet, the kind of place where you can leave your watch in your bag and lose track of time. No that is not the idea either – but it is part of it.

And Dave’s Dad is just so chilled. During an interview with Dave’s Dad he tells us his motto, the Rastovich motto. And these words just stuck in my mind. They some up all of the of what the positive thinking and goal setting, “change you life” books have to say. Six words…

Fantastic. And if you have been reading some of my previous posts you’ll understand how, when we talk about achieving goals, those six words really do some up how the mind works. Again that is still not the idea – but it feeds into it.

So what is this big idea of mine? If curiosity has the better of you then post a comment and I’ll drop you an email.