Real or perceived fatigue during the Cape Argus Cycle Tour 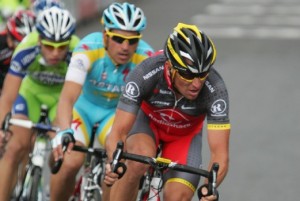 I have talked about the perception of fatigue. In my previous post I mentioned that Professor Tim Noakes states that “the brain, when it senses that the athlete is overstretching him- or herself, sets off a series of sensations that the body translates as symptoms of fatigue. The brain does so to protect itself, the heart and the rest of the body. “Its main function is to make sure you don’t get into trouble in whatever exercise you’re doing”.

I just completed my very first Cape Argus Cycle Tour, with a wind resisted time of 5 hours and 17 minutes. For the most part I felt stronger than I had expected, but there were times when all I could think of was “when will this end”. I have to wonder at what point my brain was correct when it told my legs, “hey slow down”. It is incredibly difficult to know how far to push yourself. Athletes who have down years of endurance training seem to develop an accurate sense of how far they can go. For those unschooled in endurance sports it is a process of trial and error.

Interestingly, in matters of adequate hydration, the brain seems unable to forewarn us of impending doom. In the last month I have come dangerously close to serious dehydration. When our brain eventually tells us that we’re thirsty it is usually too late and we’re already beginning to dehydrate (I wish it worked like that for food). In a recent Xterra (cross country triathlon) we raced in temperatures exceeding 40 degrees, and at least one competitor suffered severe and life threatening heat exhaustion. And in the Cape Argus Mountain Bike Challenge, also in temperatures exceed 40 degrees, one competitor suffered a heart attack.

For those of us who have never done endurance sports (like me), learning how far we can push ourselves is a real challenge. Either we hold back too much, or we push too fast and too soon. After a year of endurance training, the Cape Argus was the first time where I was able to keep my level of exersion in the “Goldilocks Zone” (not too hot and not too cold, just right) and it worked out well (at least to the top of Suikerbossie).

Suikerbossie was an interesting experience. After around 85km of cycling I decided that I would put everything into Suikerbossie and just cruise home (downhill all the way to the finish). So while others were walking or being pushed, I was out of the saddle and punching up the last big hill. My legs were screaming and my heart was thumping but everything was focused on this last big hill. Sadly, I had not factored in the strong head wind on the final stretch. I was spent and all I could think about was “I’m shattered and I just want this to end”. I think it was “mind over matter” on the way up Suikerbossie, and “mind over matter” on the way down.

I would love to hear your thoughts.