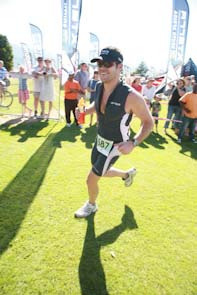 You may have guess that I am more than a little obsessed with the perception of fatigue. Having completed the Cape Argus Cycle Tour this weekend and having had a taste of being in the saddle for 5 hours, and then looking ahead to the Wines2Whales 3 day mountain bike stage race in November, you can imagine that the topic is very relevant for me, and hopefully for some of you other crazy folk out there.

Picture this, you’ve been riding for three hours and you’re tired, you can feel the burn creeping into your legs, a sure sign that your body is producing more lactate than it can metabolise. You know that if you carry on at this pace you’re not going to make it. And you begin to wonder, how on earth to the professionals do it? Is their perception of fatigue the same as yours or are they immune to feeling the burn. Now I am not a professional athlete, nor do I have loads of experience in endurance sports, so I am speculating here… but I imagine that professional or elite endurance athletes feel the burn just as much as I do. It is not if they feel the burn, it is when they feel the burn.

Following this hunch I went in search of any academic articles that might support this notion. And what do you know, I found several and one in particular caught my attention. Demello and colleagues found that “LT [Lactate Threshold – the point at which the accumulation of lactate exceeds its removal] is an important physiological anchor point for perception of effort that is not affected by state of training or gender. Trained and untrained men and women perceive the exercise intensity at LT as “somewhat hard” (RPE [rating of perceived exhaustion] = 13 to 14). During moderate-to-heavy exercise intensities, RPE is more closely linked to the metabolic and gas exchange alterations initiated at the LT than to %VO2max utilized“.

So what are they saying? The first part of the answer is to know that your Lactate Threshold is not fixed. LT training can shift the threshold higher (meaning that you can swim, cycle, run harder for longer before you reach your LT). The second point is that if your perception of exhaustion/fatigue is linked to your LT then, given a constant rate of power, your perception of fatigue is lower given your higher LT.

So that does suggest to me that professional and elite athletes are able to swim, cycle, run faster or harder or longer before they begin to feel the way I do when I’m swimming, cycling or running. And the good news is that with some training I can shift my LT so that the Wines2Whales stage race might not be as horrific as (post Argus) I now imagine it could be (I was wondering what on earth I have gotten myself into).